Newest Vol is a winner! Dave Hart and his wife, Pam, accept a Number One jersey from UT Chancellor Jimmy Cheek.

This is a guest blog post by my friend and client Mary Bogert, the general manager of the Knoxville Convention Center. She wrote it for her own blog, From Inside the Center, shortly after a welcome event that Moxley Carmichael put together last month for Hart at the Convention Center. So, here’s Mary:

I’ve met the newest member of the Tennessee Vols team, and I think he is a winner!

We recently hosted a welcome reception here at the Convention Center for the University of Tennessee’s new Vice Chancellor and Director of Athletics Dave Hart and his wife Pam.

On behalf of the University of Tennessee, Chancellor Jimmy Cheek presented Dave Hart with a framed Volunteer football jersey honoring him as #1. Hart joked about meeting one of the UT students while serving as a volunteer Pilot Celebrity Pumper during the recent United Way fundraiser.

“After introducing myself to a UT student at the Pilot on Cumberland and pumping gas for him, the student said to me, ‘Well Mr. Hart, if you don’t win some games soon you have a good start on a second career.”

Good to know he has a sense of humor. But as Chancellor Cheek said, Hart also has a lot of experience winning. He knows what it takes and is committed to creating a “Pat Summitt standard of excellence” throughout the University of Tennessee athletic program. That is a great goal!

He may have played for Alabama, worked at Alabama, and even received two degrees from Alabama, but he is wearing Orange proudly now.

University of Tennessee President Joe DiPietro was there for the welcome, as well as President Emeritus Joe Johnson and interim Athletics Director Joan Cronan. Everyone seemed as pleased as I am with this new member of the Volunteer team.

With this final member of the UT Athletics Department team now in place, I say GO Vols! The sponsors all posed with the Harts prior to the start of the party. From left: Ken Parent of Pilot Flying J, Patrick Birmingham of the News Sentinel, Pam Fansler of First Tennessee Bank, Pam and Dave Hart, Norman Majors of UT Medical Center and Chancellor Jimmy Cheek of UT-Knoxville. 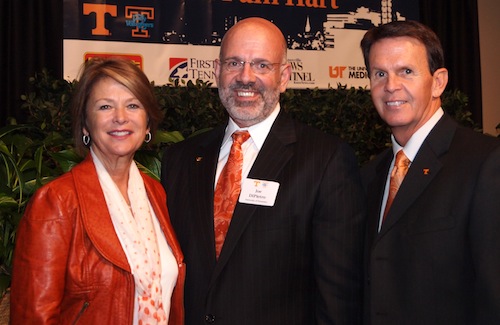 The Harts with University of Tennessee President Joe DiPietro The receiving line was non-stop. The Harts with Allison and Knox County Mayor Tim Burchett Larry Martin and the Harts The Harts pose with Jim Nichols. Jon and Mintha Roach with the Harts Karen and Pace Robinson share a laugh with Linda Davidson, at right. Lots of UT sports memorabilia was on display, of course! The appropriately colored flowers were unusual and interesting. Ken Parent, right, with the Harts Patrick Birmingham made remarks on behalf of all the sponsors. Chancellor Cheek seemed very happy to have Dave Hart on board! The crowd was welcoming, as well.

Credits: All photos are by Gary Heatherly on behalf of Moxley Carmichael. Thanks again to Mary Bogert for writing this guest post for The Blue Streak.