One of the hardest things to get used to after being elected Tennessee governor, according to Gov. Bill Haslam, is not being able to ride in a car alone with his wife, Crissy. “Just think about it,” Haslam commented over dinner recently. “When you and your spouse get in a car to go to an event or leave an event, think of all the things you talk about!” As governor, though, Haslam and his wife have a driver and therefore are never able to have those candid and confidential conversations. Now I can’t get in the car with Alan without thinking about what Haslam said. And he’s right!

Several Knoxvillians were among the 32 guests gathered at the Tennessee Governor’s Residence for an event recently and were treated to a lesson on the interesting history of the Residence. Haslam, relaxed and comfortable, chatted during a reception and dinner about the two-story Georgian-style brick house on South Curtiswood Lane that has been home to Tennessee’s chief executives since it was purchased by the state in 1949 for a little over $100,000. The house, built in 1929 on 10 acres, is next door to the home of the late country music legend Minnie Pearl, also known as Mrs. Henry Cannon. This painting of Andrew Jackson has a story.

Haslam related how the painting above, hanging in the living room of the Tennessee Governor’s Residence, was purchased at an auction by former Tennessee First Lady Betty Dunn, wife of Governor Winfield Dunn. She wondered who kept bidding against her at the auction, running the price up. She was a little dismayed to discover that she was bidding against the White House, which was on a mission to collect paintings of former presidents. Only when the person from the White House realized the opposing bidder was the First Lady of Tennessee, did they drop their attempt and let her win the painting.

Similarly, in the dining room, there is a sterling silver punch bowl set that was recovered from the battleship U.S.S. Tennessee. (Apparently, many battleships have these beautiful punch bowls. Just Google “punch bowls on U.S. battleships” for more info on that. Who knew?) Anyway, the U.S.S. Tennessee was damaged during the attack on Pearl Harbor and when it was decommissioned much later, the punch bowl ended up at the Governor’s Residence in Tennessee. But during the Reagan administration, the Federal government made a claim that the punch bowl was U.S. Navy property and demanded it be returned to Washington. Lucky for Tennessee, however, President Reagan’s chief of staff at the time was Tennessee’s former U.S. Senator Howard Baker, Jr. Baker intervened and the punch bowl got to stay in Tennessee. The Navy had to make do with a replica. The punch bowl from the U.S.S. Tennessee Ruth Fielden of Knoxville and former Knoxvillian Kurt Faires who now lives in Chattanooga. Faires is engaged to Judge Sell, above. Steve Ridenour, left, and Alan Carmichael, both of Knoxville. Dinner was served in the foyer. Have you ever seen such tiny kiwis?

The chargers at each place setting featured a beautiful iris, the state flower of Tennessee. They were purchased by donors and each one has the donor’s name on the back. Governor Haslam said he sat down the other day and peeked under his plate to see who had paid for it. It said “courtesy of James A. Haslam II” — the governor’s father.

One of the pretty chargers. Governor Haslam at the dinner table with Bill and Maria Lee of Franklin.

After dinner, Governor Haslam made a few remarks and offered to answer questions. 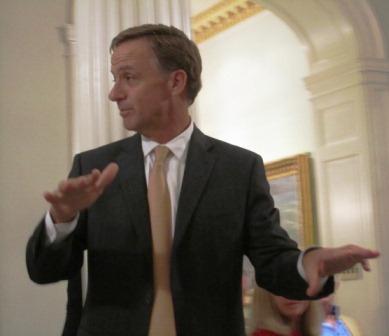 He encouraged questions about anything. Joe Hollingsworth of Knoxville asked one.

Here are a couple more things he pointed out about the Tennessee Residence. Elvis Presley used to visit when Buford Ellington was governor in the 1960s. He played shuffleboard with the governor’s daughter. This photo of Elvis visiting the Residence is in the living room. The shuffleboard has been dismantled and mounted on a wall. This portrait of the 11th U.S. President, James K. Polk, hangs in the dining room.

President Polk, from Tennessee, was quite short in stature, so often people did not notice him when he entered a crowded room. It was during his term that it became a tradition to play “Hail to the Chief” when President Polk entered a room. That way people would know that President Polk had arrived. The tradition stuck.

On a personal note, I have to say that I have known Bill Haslam for about 20 years. I’ve spent time with him when he was at Pilot and when he was mayor of Knoxville. But never have I seen him so comfortable in his own skin as he is now in the Governor’s office. He is confident, thoughtful, easy-going and natural. He really seems to be having a good time. For the record, folks at the dinner table did ask him if he would consider being a vice presidential candidate to Mitt Romney. He laughed off the question as if it were a joke. But I don’t know . . . On the threshold, Governor Haslam says farewell to his Knoxville friends Joe and Ruth Fielden.

P.S. This just in. First Lady Crissy Haslam and the Governor have issued an invitation for the public to visit the Governor’s Residence to see it decorated for the holidays. If you would like to go on a tour, just click on this link to make your reservation: http://tn.gov/firstlady/holidays.shtml