In Paris, the traditional Le Diner en Blanc, also known as the White Picnic, attracts upwards of 10,000 folks. In Knoxville, I thought the 150 or so who gathered at the Knoxville Botanical Garden and Arboretum last Saturday for our version of it was a pretty impressive turnout.

Here’s how it works. The organizers — Debbie Allen and Mary Collins-Shepard — send a “save the date” email a few weeks out. But the folks on the email list don’t know the secret location of the event until the afternoon of the day it’s going to happen. That’s when they get another email telling them where to come.

In Paris, where this all started, it’s so as not to alert the authorities — and to preserve the clandestine nature of the soiree. That’s part of the strategy here, too. When the picnic is held on public property — like last year’s, which was at Volunteer Landing — the laws prohibiting alcohol can be problematic. That’s why attendees are urged not to bring beverages in their original containers, but, instead, to pour them into something else. Kandyce Harber lights a candle for romantic ambience at the White Picnic.

A long list of other rules also apply. Participants must dress in white, have white table linens, real white plates and real cutlery — no plastic. And, something tricky, you must be able to carry all your picnic items — including your table and chairs — from your car to the picnic location in one single trip. This calls for creative packing, for sure.

Several folks meeting up with friends had small tailgate parties in the parking lot while waiting for the official group march to the picnic location. And the organizers generously doled out complimentary mojitos and white cosmopolitans while everyone gathered.

Anyway, it’s a ton of fun. Having it at the Knoxville Botanical Garden eliminated the concern about public alcohol consumption. I hope it’s held at an equally tolerant location next year, as well. I don’t think getting arrested would be that much fun. Here are my cohorts gathered in the parking lot before the group march to the picnic. From left, my husband, Alan Carmichael, and Richard and Dawn Ford. Mary Collins-Shepard, one of the organizers. From left, Sharon Deaver, Johnna Easter and Megan Venable. We ran into them in the parking lot and plotted to put our tables next to each other. The picnic was on a huge terraced area of the Botanical Garden. Here’s the beginning of the unloading process. It was great seeing our friend Michael Moore. That’s our buddy Vicki Williams-Baumgartner in the white hat. She was instrumental in securing the Botanical Garden as a location. Love the fans at her table that say, “French Broads!” Time to dig in! The simplest food tastes great in a setting like this! Megan brought some fans left over from her wedding day! They came in handy. Their table also had this delicacy on display. Since this was our first time at this event, we decided to keep the food simple. I made this tuna salad that I first had at a restaurant in Paris called Le Dauphine. I like it for picnics because it features olive oil rather than mayo. We just heaped it onto slices of baguette. Another course at our table. Music was by Chuck French, right, and his son, C.J. French. They call themselves “The French Connection.” Ha. (Photo by Megan Venable) Here we are. (Photo by Johnna Easter) 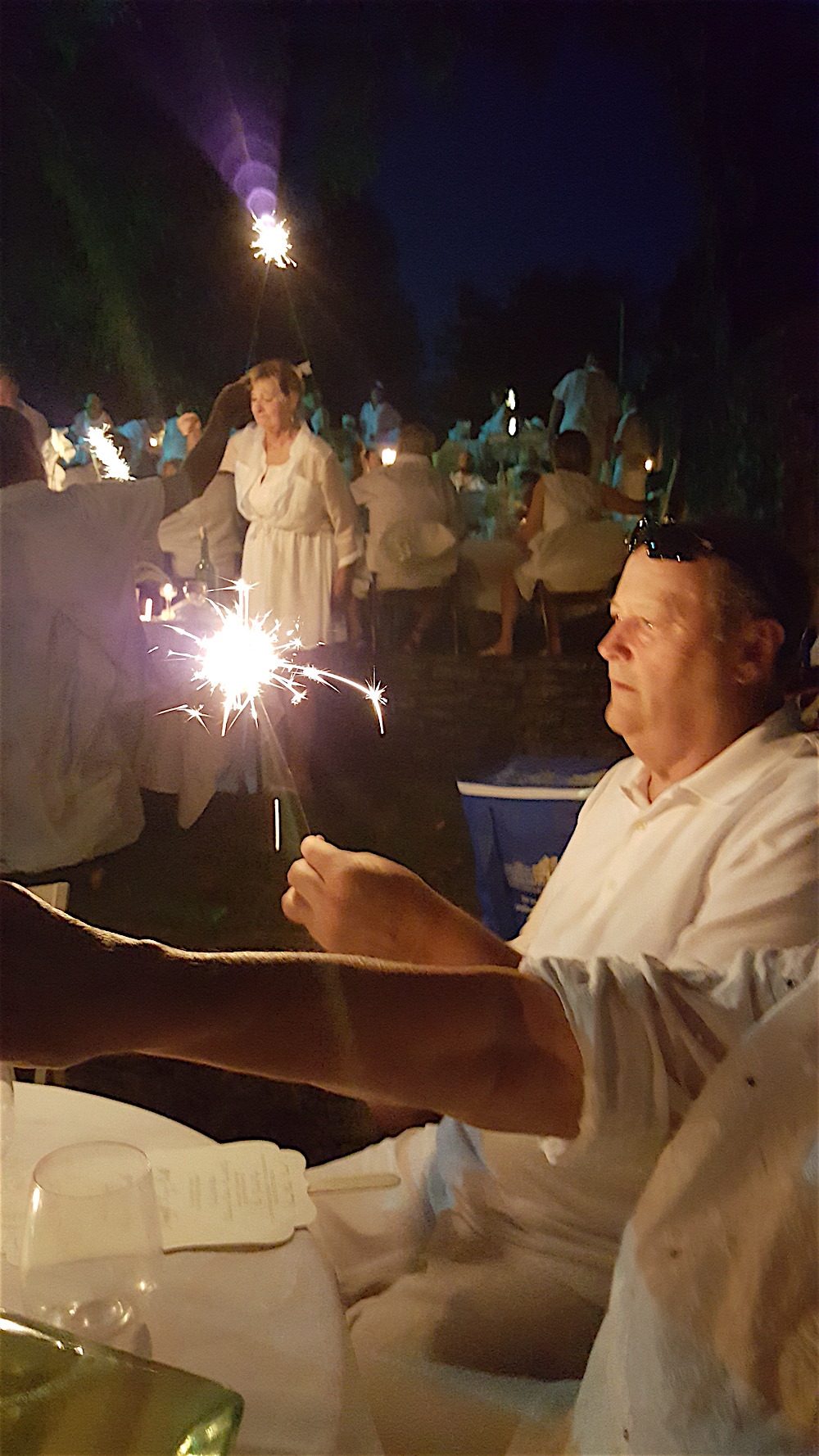 And who doesn’t love sparklers? Thanks so much to the organizers. We already are making plans for next year.