Johnny Majors on music, race and running it up Former University of Tennessee football coach Johnny Majors was guest of honor Sunday at one of the Knoxville Symphony League‘s “Elegant Dining” dinners and I, for one, was surprised and touched by some of what he had to say. He and his wife, Mary Lynn, have just returned from a trip to South Africa and Majors seemed to have been genuinely moved by the visit. Here were some of the highlights of his after-dinner remarks to the 22 guests who, along with a half-dozen or so hosts, gathered in Beth and Darrell Thomas’ Whittington Creek living room to hear him:

This was a great event for the Symphony League. But Darrell and Beth Thomas had a little excitement getting ready for it. They were smoking pork and sausage for the feast and had put the meat in the smoker at 3 a.m. Later Sunday morning, they got up, dressed and went to church. When they returned home, flames were shooting from the smoker. “I think it had just caught on fire when we pulled into the drive,” Darrell said. The meat was saved — but the smoker was a complete loss.

This was not one of those catered affairs. Beth made all the other food that accompanied the meats: asparagus roll-ups, chicken pear gorgonzola tarts, blue cheese port cucumber bites, pesto green beans and tomatoes, tomato tart, feta cheese squares, and peanut butter fudge cake (which was to die for). Here are a few of the dishes: Darrell was assigned the task of folding the napkins. And what a great job he did! He got on the internet, figured out what shape he wanted, got out the iron and produced about 30 of the prettiest napkins ever — all in about 20 minutes! Darrell and his finished product The roses on all the tables were perfect "UT orange." Oscar, the Thomas' doggie, was dressed for the occasion. Majors and Julia Shiflett, one of the hostesses 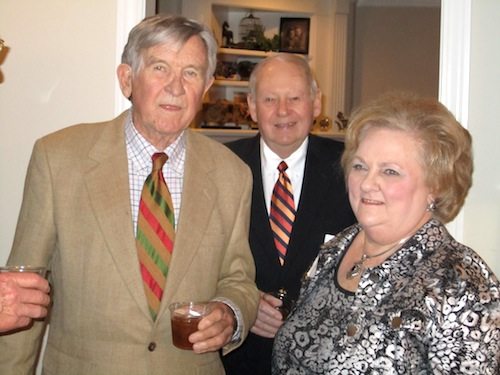 Majors with Walter and Hannah McDaniel