Inauguration night: 3 great parties, the prettiest dress ever and champagne in a paper cup Although media reports generally have characterized the Bill Haslam inaugural festivities as low-key and frugal (click here and here for those stories), the night definitely provided ample opportunity for fun.

Haslam had toured the state during the prior week meeting citizens in events that were completely free of charge. In Nashville on inauguration night, a series of three parties offered celebrants the chance to mingle on three different budget levels: a $2,500-per-person sponsor dinner in the Tennessee Ballroom of the Opryland Hotel; a $250 dinner in another Opryland ballroom; and a $50 ball in a huge atrium area of the hotel. (If you paid for the first, you got to attend all three.) This arrangement helped assure that state taxpayers did not have to foot the party bill.

We started the evening with a great  tradition we have come to love. When Bill Haslam first ran for mayor back in 2003, Moxley Carmichael designed his logo and the campaign put it on everything. Including a bunch of paper cups. I mean a BIG bunch of paper cups. So many, in fact, that there still are boxes of them left over eight years later. So, since it worked out so well back then, every time several of us are gathered together for a campaign event of his, we have a toast in those leftover cups. We look forward to doing it when we are at his Presidential inaugural in several years. (No, I don’t know anything! Just saying.)

The first stop of the night was the Tennessee Ballroom for the sponsor dinner. The seats were assigned and Alan and I found ourselves at a very fun table. Here were our tablemates: Billie and Jim Shelby, Bobbie Congleton, Ann and Jerry Bodie and Lisa and Bob Beldyk.

During the dinner, the new governor made the rounds, going from table to table. “You won!” I joked with him. “You don’t have to do this anymore!” But he said very seriously, “I’ve got to thank these folks for everything they did.” Nicest guy in the world. Bill Haslam seems to have surprised Bobbie Congleton when he came to our table at the sponsor dinner!

At this event, the guest entertainer was Larry Gatlin, who charmed the crowd with his personal story of his plans to move back to Nashville from Texas. Gatlin performing his hit, "All the Gold in California"

These are our tablemates Ann and Jerry Bodie opening some of the gifts we received as party favors. I’ll put a shot of it all at the end of the blog. Dinner was great. But it was basically what you get at all these types of events. Filet mignon, a green veggie and a potato. I posted a picture of the plate on Twitter, with a caption: “Here’s what a $2,500 dinner looks like. In case you were wondering.” Got lots of funny responses, but this one from Shane Rhyne was my favorite: “If I every pay $2,500 for a meal, let me share a list of naked people I want to serve it.” Hahaha! We moved into another ballroom at this point to join some others from a different party for dessert and to see the new First Couple have their first dance. Dessert was an elegant chocolate and banana cheesecake concoction. 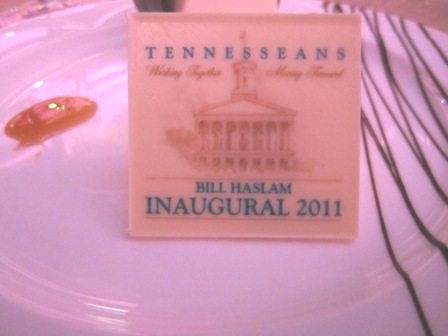 This piece of white chocolate had the inauguration's theme on it: "Tennesseans working together; moving forward."

Entertainment at this part of the event was singer Lorrie Morgan who played, among other things, “Fly Me to the Moon,” a piece the Haslams had selected for their first dance. They had taken dance lessons and pulled it off perfectly! Bravo! Lorrie Morgan. (I cheated and took this photo of the big screen.)

Outside this ballroom was a great mingling area. Several backdrops were set up and folks took turns taking each other’s photos. The Catanis and a giant guitar Then it was time to go to the final party which I really wanted to attend because I wanted to see Jason D. Williams, who was to be the performer. But this event was slam-packed. We couldn’t get near the stage. We still saw tons of Knoxvillians, though. Alan, right, and Mark Cate, another Knoxvillian headed to Nashville. He'll be special assistant to the governor.

We never did make it totally to the area where the stage was. Fortunately, large screens were set up throughout the room, so I took this photo of Jason D. Williams from one of those. The music sounded great! We were patting ourselves on the back for choosing to stay at the hotel where all the Saturday activities took place. When we got tired, we just said goodnight and headed for our room where we looked at all the “swag” we had collected. Tote bags, glasses and decks of cards all featured the inauguration date and theme. Great souvenirs.

Sunday morning we collected ourselves and our car poolers and, after a fun brunch at Noshville, one of Alan’s favorite eateries, we headed to the open house at the Governor’s Residence. They wouldn’t allow photographs inside, so this one of the exterior is all we got. It was a great start of what I believe will be a great governorship. Good luck, Bill!

6 Responses to Inauguration night: 3 great parties, the prettiest dress ever and champagne in a paper cup