Posted on November 9, 2010 by Cynthia Moxley Barbara Dooley, the mother of UT football coach Derek Dooley and the wife of legendary University of Georgia coach and athletic director Vince Dooley, says her son has her under a gag order in Knoxville — she’s not allowed to do TV interviews.

But that hasn’t stopped her from speaking her mind to various civic groups in our town. Her latest appearance was last Friday when she was the luncheon speaker at the Junior League of Knoxville‘s “Tinsel and Treasure” show at the Knoxville Convention Center. Barbara Dooley was super friendly as she mingled with the luncheon audience.

A Realtor, former radio talk show host and Republican political candidate, she has many opinions on how to get the most out of life. Approaching her five-year anniversary as a breast cancer survivor, her main philosophy seems to be, as she said, “to grab each day and suck every drop you can out of it.” Some other gems from her speech:

Dooley said the things that make life worth living are attitude, integrity, faith and love. And the most important thing is love. For her finale, she had someone put Stevie Wonder’s “I Just Called to Say I Love You” on the sound system. “Play it loud!” she instructed. Then she danced through the audience singing along and getting everyone to do the same.

A most enjoyable lunch for this Georgia graduate! 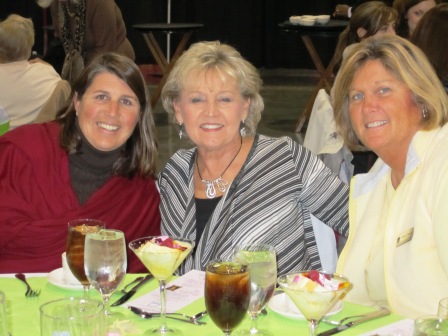 From left, Amanda Armstrong and Elizabeth Thomas, both of Children's Hospital, and Karen Massey of the Knoxville Convention Center It was a happy line that assembled to purchase Dooley's two books and chat with her. The tables were simple but elegant. Every centerpiece was different. The Convention Center did a great job with the food,which was perfect for a "ladies' lunch:" tomato basil soup and chicken salad served on a croissant. Dessert was a beautiful but low-fat raspberry mango sundae decorated with flower petals.

6 Responses to Barbara Dooley on life, football and “Precious”